For indoor mobile service robots, how to achieve robust localization in navigation has always been a central problem, as the GPS does not work well in indoor environments due to loss of satellite signal.

Conventional laser-based SLAM (Simultaneous Localization and Mapping) system can work reliably in simple environments that do not require high accuracy of localization. When it comes to complex and dynamic environments such as large shopping malls, supermarkets, and factories, this approach is highly limited. When the site layout changes tremendously overnight, or the environment is emptied and lack of reflective surfaces, theoretically the laser data alone cannot create effective constraints between the current trajectory and the historical map, causing the robot to get lost and bump against objects when revisiting the same scene.

Common vision-based SLAM systems, on the other hand, can provide highly accurate localization. The robot carries cameras and recognizes natural landmarks (e.g., walls, corners) or artificial landmarks (e.g., QR codes) to localize itself. On the downside, vision-based methods are more computationally intensive and expensive and can be unreliable due to illumination variation and environment changes.

The above-mentioned localization methods are therefore unreliable for commercial floor cleaning robots that have to run back and forth for a long time in dynamic environments, which poses higher requirements for the robustness of the localization system. 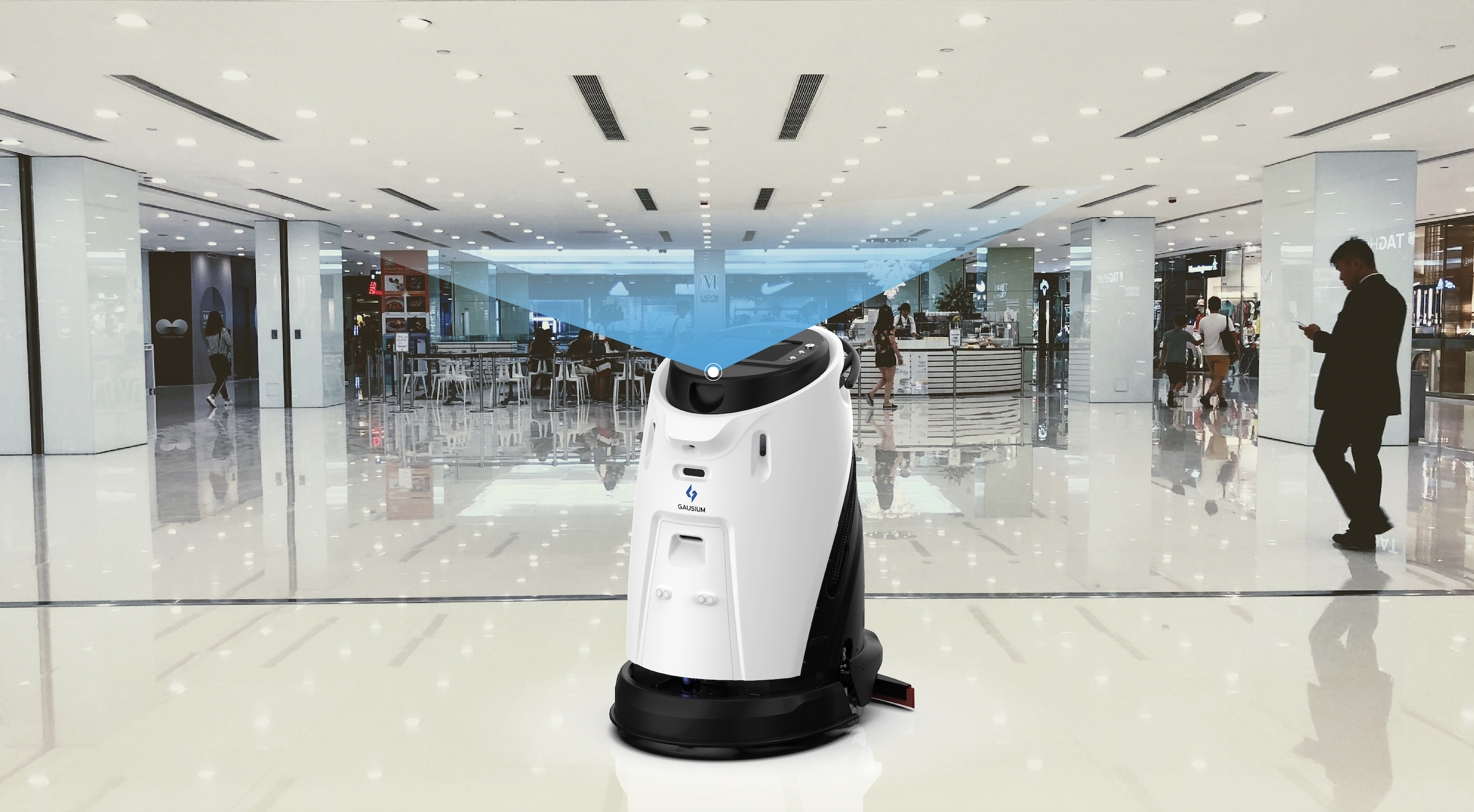 As opposed to conventional ceiling vision solutions in which location markers have to be placed on the ceiling, Gausium’s ceiling vision localization system does not require any specially deployed artificial landmarks such as QR codes, which saves a lot of time and effort. The feature extraction algorithm developed by Gausium enables the robot to identify the visual features of the ceilings such as pipes, lights, squares, curves, etc. and use them as natural landmarks for localization. It also overcomes the shortcoming of susceptibility to illumination changes in common vision-based SLAM algorithms, and manages to achieve accurate localization in a variety of indoor environments throughout the day.

Users do not need to be concerned about the incompleteness of map during the first scan. The Gausium ceiling vision-based localization system provides automatic maintenance of the ceiling vision map throughout the time the robot is working. When the robot drives to the previously uncovered area, the missing part will be automatically covered and added to the map. This advantage is derived from the long-term localization and mapping scheme of Gausium’s laser-based SLAM.

Integration with the Laser-based System

In order to improve the versatility and adaptability of the robots, Gausium has designed a scheme to merge the ceiling vision-based and the laser-based localization systems. The two systems can work either independently or in conjunction. During the task of the robot, so long as the perception of a scene of a vision modality matches that of a laser modality, constraints will be established to provide higher accuracy of localization in a complex and dynamic environment.

To further simplify the deployment, Gausium has managed to make the ceiling vision localization system completely foolproof. The system can be activated simply by retrofitting a low-cost, upward-looking camera to the Gausium robot and be easily extended to larger areas, which is truly plug-and-play.

The ceiling vision localization system has been implemented successfully at scale in several Gausium robot models such as Vacuum 40 and Scrubber 50, providing robust, safe and reliable localization for thousands of applications around the world. Users will no longer have to manually update the map upon each layout change of the site or worry about their robots running into temporary clutters and new booths.

Gausium (alias “Gaussian Robotics”) was founded by Edward CHENG in 2013 out of a passion for autonomous driving. It started as a solutions provider of SLAM (simultaneous localization and mapping) and integrated robotics software. Today, Gausium has become a leading solutions provider of AI-powered autonomous cleaning and service robots with currently the world’s most comprehensive commercial cleaning bot portfolio. Currently, Gausium’s products and services include commercial floor cleaning robots, indoor delivery robots and supplementary accessories like docking stations, cloud platform and application software.

Please select the type of your business, and help us direct to the right person.